To understand our culture, values and attitudes a bit more, it is useful to find out about our local history, and how it sits with the wider story of our region, and Hungary as a nation.

Here are some highlights for you from our little-known history, with some cultural references.

Although present-day Hungary is quite small, about the size of Denmark, its inhabitants usually don’t think of it as such. They are proud of the achievements and glory of their ancestors, and are also aware of the significant geopolitical role their nation has played in in Central Europe for the last 2000 years. 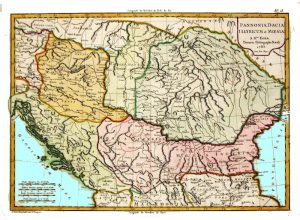 Although Hungarians had not yet arrived in the region, the territory lying west of the river Danube was a province of the ancient Roman Empire known as ‘Pannonia’. To the north and east there was the land of ‘Barbarians’ – people living here had to stand guard and protect the ancient ‘civilised’ world from them. Although few buildings remain from this era, you can easily take a day trip from our village to see Villa Romana Balaca.

Nyim: If you see some locals walking around with metal detectors, don’t be surprised. Legend has it that when the Romans left this region in haste, a rich villa owner buried a gold statue of a donkey for safekeeping, and never came back for it. No great discoveries have been made yet, but some people claim to have found Roman coins and pieces of pottery in some gardens. 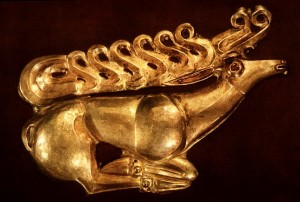 Hungarians were nomadic people who are thought to have come from somewhere near the Ural hills, the dividing line between Europe and Asia. According to the Legend of the Wonderous Stag (Rege a csodaszarvasról) Hungarians arrived here in pursuit of a mythical stag and found a new home for their descendants. Historically, we are talking about the Great Migration of Europe and Asia, which happened between 400-800, and many tribes traveled long distances to find a new place to live.

Hungarian tribes conquered their homeland in Europe in 895 A.D. (Honfoglalás). There was a great celebration on the 1000th anniversary of this occasion, and, among many other buildings and art projects, Budapest’s iconic Heroes’ Square was also commissioned. 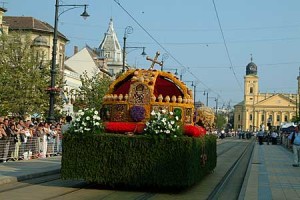 On the first day of the new millennium our very first king, Saint Stephen (Szent István király) was crowned by the current pope. He was a descendant of Árpád, leader of the pagan Hungarian tribes and conquest, but he was raised in Christian faith. This was because by this time in Europe, it became a necessity to establish a powerful religious feudal state, allied with its neighbours, to ensure the nation’s survival.  The Árpád-dynasty died out in 1301, but their kings can be credited for laying the strong foundations of the present-day country.

St Stephen and the founding of the Hungarian state is celebrated on the 20th of August, which is a national holiday. To see the most spectacular display of flower floats, marching bands and folk dancers,  head to the east of the country, Debrecen, to see the Flower Carnival (Virágkarnivál) held there each year.

Nyim: Our village was first mentioned in 1193 as ‘Nym’, and was later documented as property given to either religious orders of monks or feudal lords. Wine experts claim that our area was also known as a good wine region. On visiting the village, you will find that some locals still maintain their small vineyards on a hill just outside a village, and produce their own wine to enjoy with family and friends. 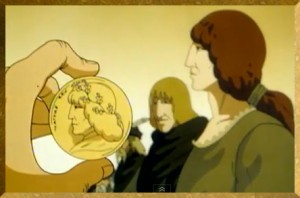 Following a long succession of kings from different European dynasties, the young son of a powerful and successful governor was elected as king of Hungary, and became the most popular Hungarian royal of all times. He was a strong leader who centralised power and managed to stabilise a country previously dominated by rich landlords. Many legends tell tales of how Mathias the Just (Mátyás az Igazságos) disguised himself as a beggar and tricked and punished the rich and powerful who preyed on the poor. Although there is no historical evidence of such activity, this fame was partly due to the unprecedented stability and economic success the country enjoyed during his reign. He was a successful military leader as well as an educated ruler, enabling Renaissance culture flourish in Hungary.

For whom the bell tolls: In Hungary you will hear most church bells ring at midday (déli hanagszó). This tradition goes back to the 15th century, calling Christians to prayer as the Muslim Ottoman Empire threatened Europe. After 1456, when King Mathias’s father János Hunyadi achieved a major victory against the Turks, the midday church bell ringing became associated with a celebration of this victory. You may find that Hungarians are still proud of the fact that their ancestors managed to stop and contain the Ottoman invasion, and therefore changed the course of European history.

Nyim: Eventually, most of Hungary fell to the Turks in the 16th century. Villages were raided and burnt, many people were killed or died of starvation, leaving settlements abandoned and derelict. The medieval village of Nyim was no exception: we know that it was on the hill where now the Catholic church stands, but hardly any traces of it can be seen today.

From the 18th century: Hapsburg dominance

After the eventual fall of the Ottoman Empire, the Hapsburg dynasty from what is now Austria became increasingly powerful and gained control over Hungarian territories. Our ancestors, clinging to their lands as due legacy from their forefathers, attempted to overthrow them several times.

A major attempt was the War of Independence led by Ferenc Rákóczi II, 1703-1711, originally encouraged by the French who were eager to see the Hapsburg dynasty weaken and disappear in Europe. When the promised French support did not arrive, Rákóczi could not secure the help of Peter the Great, Tsar of Russia, and eventually lost the battle against the powerful enemy and their allies. 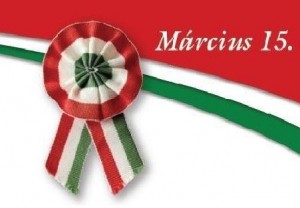 If you visit a Hungarian town or city on the 15th of March, you are likely to come across big crowds on the main squares, waving flags and wearing rosettes of national colour, often watching an enactment of the series of events that took place on 15th of March 1848.

Inspired by the French ideals of ‘Liberty, Equality, Fraternity’ and fired by the series of revolutions in Europe referred to as the ‘Spring of Nations’, this day marked the start of the next wave of resistance and strive for freedom in Hungary. It was a time of great national aspiration and pride: our first independent and accountable government was elected, the Hungarian national anthem was written. Many poets, for example, Sándor Petőfi encouraged everyone to fight, under the direction of Lajos Kossuth, for their land and a better world to come. As Hungarian troops were gaining ground, the Hapsburg emperor asked the Russian tsar for help. Cornered in and attacked from two sides, the Hungarian army lost the war in August 1849.

Following a series of executions and years of revenge, a period of passive resistance, led by Ferenc Deák – whose picture you can see on the 20 000 HUF bill- resulted in an agreement in 1867, establising the cooperation of the Austro-Hungrian Empire, which ended with the First World War. 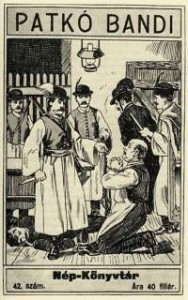 Our local hero was also fighting injustice in the 19th century. An outlaw known as Patkó Bandi (Andy Horseshoe) was a Robin Hood-like figure, hiding in forests and caves with those who joined him. He gained his nickname because, supposedly, he used to have the horseshoes of his horse nailed on facing backwards, to confuse officers who were trying to track him down. Ultimately, he was captured near our village in 1862, at the site marked by a tree.

A military survey of 1799 describes our village as a ‘Hungarian village in the county of Somogy, landlord Polish, inhabitants Catholic and Reformed, lies one hour from Ádánd, Som and Ságvár, agricultural land none, forests yes, vineyards a few, no mill, its market in Veszprém’. Another document from 1851 adds that ‘the last post office is in Siófok’.

Today, in the democratic republic of Hungary, we don’t have a feudal landlord, of course. We still have a Catholic and a Reformed church in the village, both are regularly attended by some locals. Distances are much shorter, and the post office now comes to our door – see the Services page for more details.