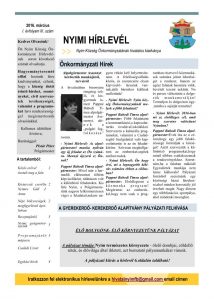 Many of you are likely to know our Vice-Mayor, Mrs Timea Pappné Babodi, as her other job is a nursery/kindergarden teacher <(ages 3-6 in Hungary)>.
– Being a Vice-Mayor is a new position for you. How do you find it so far?
_This is my third term as local government representative, so I have already seen what tasks there are for us to complete. Nyim is a small village, and the Mayor is working very conscientiously, so it does not happen often that I have to stand in for him. We share responsibilities, and luckily, we can always count on our fellow local representatives.

– What are your main duties for the local government?
_My most important task is to keep in touch with the local kindergartens and schools. I organise local cultural events, and I am also in contact with the Family Support Service. I am ready to listen to people and help then when needed.
– What is your biggest challenge in this term?
_Primarily the <national government-funded> public maintenance unit. Making people understand that it is not only useful for those who are part of it, < keeping them in employment>, but it also brings profit for the village <due to the extra work we can undertake for the locals (garden and lawns maintenance, digging, ploughing, etc.)> And, of course, to improve the motivation and morale: participants should work as if working on their own land.
– What is your main goal to achieve in 2016?
_For the past few years it has been to turn the village into a more closely-knit community. This is why we are organising a diverse range of events, hoping that more people will join in. I would also like to support local organisations in achieving their goals. If we manage to get funding, I would also like to improve the community centre in a way that all generations can enjoy it fully. My dream is to create a multi-functional sports ground, so that everybody can do some exercise. 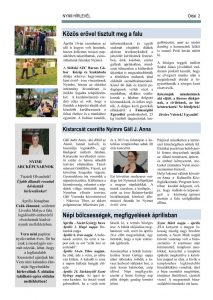 Event: Joint efforts to clean up the village

On 16th April the weather was pleasant and sunny, ideal for our big day to clean up Nyim and make it more attractive.
The students of one of the nearby vocational secondary schools (Siófoki SZC Baross Gábor) come back year after year for this event, as their schools officialy ‘adopted’ our village. The original aim of the project was to help young people feel more connected to life and work in the local countryside. The students training to be hairdressers, IT technicians, etc. have been actively involved in painting the fence around the playground, chopping up dry branches, picking up litter along roads.We had about 60 students and their teachers this year, joined by the local public maintenance unit, and enthusiastic local volunteers.

Food and drink was provided by one of our local organisations, ‘For the Pleasant Environment of Nyim’. Ample breakfast was made using 25kgs of flour, for flatbread baked in the wood-fired oven of the village. For lunch, wild boar stew was served, thanks to the contribution of János Szabó <a local businessman running a hunting lodge and a farm>.
Many thanks to all those who took part – and don’t forget: we’ll meet at same time, same place NEXT YEAR!

Judit Anna Gáll – who prefers to be called Anna or Janna – grew up a village near Budapest, along with three older siblings. She studied in Gödöllő, Vác, and Szeged. Since childhood she has always been attracted to folk art and culture, especially artisan crafts and folk songs.
The first time she visited Nyim was thanks to her sister, who delivered her the invitation of the then mayor, Tibor Nikovics, to come and give a concert in the Catholic Church on our Village Day in 2013. Following this, she often came back to sing more Hungarian folk songs at various events.
She also came back thanks to another passion, cycling, making Nyim a stopping point in their yearly Balaton-circuit. <Lake Balaton is very popular with cyclists, as there are cycle track around most of the lake, with regular tours and events. >
Both she and her partner grew up close to nature. In their life, they consider the importance of a pleasant natural, built and human environment, which they found very happily in Nyim. Once they moved here, she started to work as part of the national Public Employment for Culture project. Her aim is to use her knowledge and skills as required by the local community, serving the village.

Folk wisdom of the month:
April: The month of St George (Szent György)
1st April: Fools’ Day
6th April: According to superstition, if it rains on this day, the year will be ‘mean’
14th April: If the sown field are fresh and green, we can expect good weather. This is also the first day when the cuckoo calls.
24th April: Day of St George the Dragon-slayer (Sárkányölő Szent György) The day when spring really begins. If the autumn-sown wheat is so tall that a crow can’t be seen in it standing, crop will be ample.

If frogs start to call before this day, the summer promises to be dry. If frogs firs call after this day, spring will bring pleasant weather, and the summer will arrive soon, with good weather.
Also, according to folk belief, hearing thunder before this day also means a rich crop.

25th April, Day of St Mark (Szent Márk) Bread has always been much valued by the Hungarian people: on the Sunday following St Mark’s Day, wheat was blessed. After the Catholic mass, a procession of believers, carrying church banners and a cross, led by the priest, went around the church building, then to the nearest wheat field, where wheat was blessed using incense burner and holy water. Everybody took a few strands of blessed wheat home. 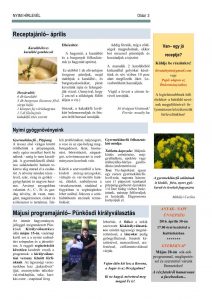 Invitation to an event in May: Pentecost King Election

As it is now traditional at this time of year, we are going to hold our Pentecost King competition on Sunday the 15th May, on the village green. After registration in the morning, the first event is the Pentecost King competition for Men. Task will include: ‘cockerel shooting’ with an arrow, pushing a woman in a wheelbarrow, log-throwing, skittles, turning up a bottle by cracking a whip. While boys compete in their own Little King event, girls can join in the craft tables, where there will be beads, braids, felt-making, face-painting, and glitter tattoos.

Who is going to get the crown and the crown jewels this year? Don’t miss your chance! 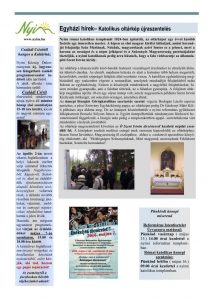 The local government of Nyim has launched a new series of events, free to attend, from April. The event named ‘Family Chirrup’ (Családi Csivit) builds on the three activities of play-create-dance, and it’s open to all ages on the first Saturday of every month.

The first event in the series on 2nd April was attended by not only locals, but people from nearby towns and villages (Nagyberény, Ságvár, Siófok). Participants first enjoyed and arts and crafts activity recycling objects, then played games and learnt folk songs from Somogy and Moldova.

The next event in the series will be held on Saturday 7th May, when we are going to make spring flowers and small animals using egg boxes – so if you can, please bring a cardboard egg box with you. We’ll give further details of the event on our Facebook page closer to the time.

This entry was posted in Monthly newsletters and tagged 2016, April.